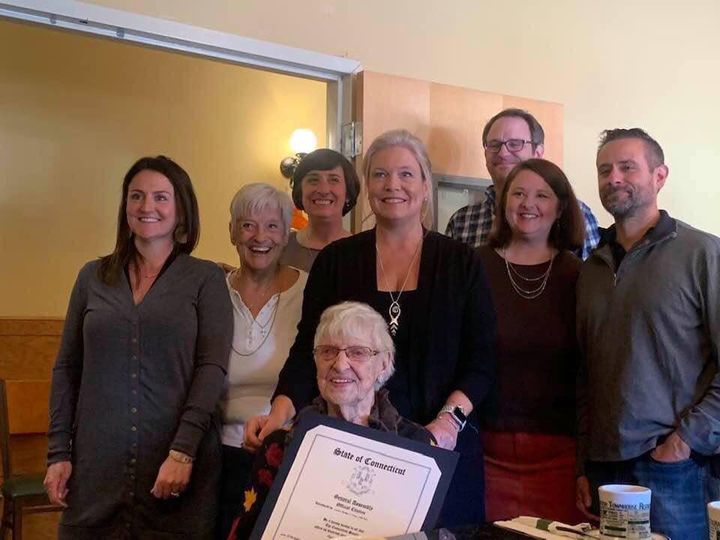 A 93-year-old woman who never had the chance to graduate high school was finally presented with her diploma 75 years later — all thanks to her loving family.

What she didn’t expect, however, was to receive something she had been waiting close to eight decades for: her high school diploma from Port Richmond High School’s class of 1945.

“I had absolutely no idea this was going to happen,” Eileen told the outlet of the surprise gift. “I’m very lucky. I’ve had a good life. This was like the topping on the cake.”

“She is our Cinderella,” her daughter, Maureen Delaney, tells PEOPLE. “She is one great lady who makes the best of everything and has been the foundation for our family.”

The idea to surprise Eileen first came to her niece ahead of her birthday, according to WABC.

Eileen’s family knew that she never had a chance to earn her diploma after she was forced to leave her high school in Staten Island midway through her senior year in order to get a full-time job, the outlet reported.

“[My stepmother] insisted [during] my senior year that I got to work; that if I was going to live in the house that I paid rent, and I had no choice,” Eileen recalled to WABC.

By 18, Eileen landed a job working for the New York Telephone Company — a position she told WABC she was “very fortunate” to have because it did not require a high school diploma.

Eventually, she met her now-husband, Eugene A. Delaney, and they wed before welcoming six children together, Maureen, 64, tells PEOPLE. Today, Eileen resides in Virginia and has eight grandchildren and six great-grandchildren.

With Eileen’s life story in mind and the fact that her class would be celebrating their 75th graduation anniversary this year, Maureen tells PEOPLE her cousin, Holly Delaney Wade, knew something must be done.

“My cousin just remembered my mother’s story… and thought it was a shame,” she explains. “She just thought this was the time.”

After coming up with the idea, Wade decided to reach out to the alumni association at Port Richmond High School and ask them if they could help, WABC reported.

Principal Andrew Greenfield happily obliged. He told the outlet that it was “the easiest and happiest” decision that he’s made this year.

Upon receiving the gift at her recent birthday gathering, Eileen told the outlet she was completely caught off guard.

“I belonged to the alumni association all these years,” she explained. “I’ve always had letters from them, but I had no idea.”

As special as the moment was for the 93-year-old woman, her family says it was equally as memorable for them.

“She was moved by receiving the honorary diploma,” Maureen tells PEOPLE. “Andrew Greenfield, the principal of Port Richmond High School, was so kind to hear my cousin’s request and act so quickly. It made for a very special zoom event with family.”

“[There was] not a dry eye in the house or on Zoom,” she continues. “My mom will be the first to tell you she never dwelled on not getting her diploma. She makes the most of every day and opportunity. It was a way to add a happy ending to what had been a difficult part of her life after losing her mother.”

Added Eileen’s granddaughter, Delaney Elliot, to WABC: “For someone who has done so much for everybody else and never asked for anything in return, I felt like this was the least that we could do for her.”